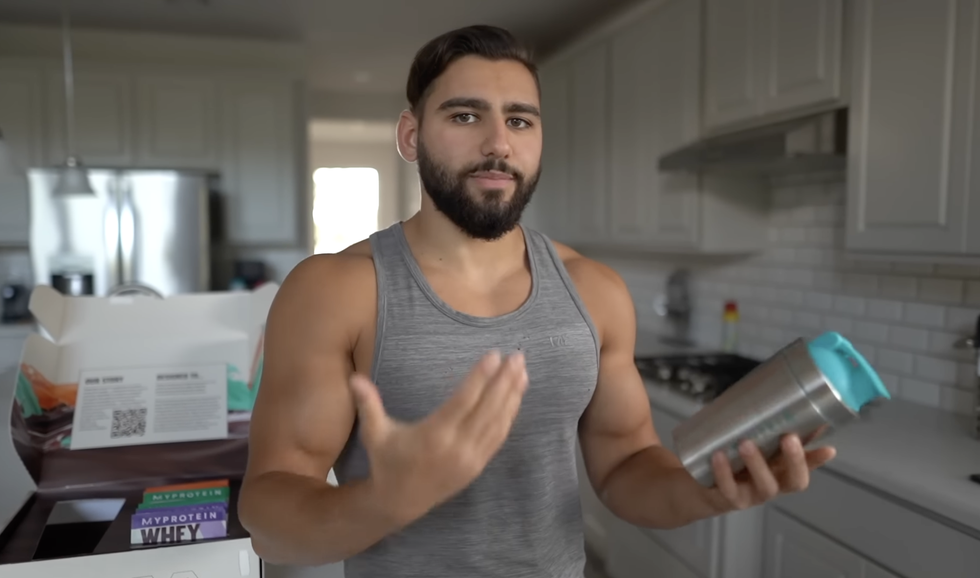 In a new video on his YouTube channel, bodybuilder and fitness model Aseel Soueid shares what a full day of eating looks like when he is trying to lose fat, demonstrating step-by-step how he prepares each meal in his cutting diet.

Breakfast is chicken sausage and egg whites, and a bowl of “proatmeal” made with oats, unsweetened almond milk, a banana and protein powder. This comes to a total of 832 calories, split across 88 grams of carbs (mostly comprised of the oats), 21 grams of fat, and 69 grams of protein.

“You might be wondering, that’s a lot of food,” says Soueid. “Well, it is… But keep in mind I don’t eat when I wake up, so this is about 3 or 4 hours after waking, I’m pretty hungry right now, I’ve had nothing but water and black coffee… This meal gets me through to nearly 3 o’clock, when I train, and then I’m not eating until 5 or 6 again.”

While the video focuses on a full day of eating, Soueid reminds his subscribers that nutrition works best for fat loss when used in concert with your workouts. “If you’re not training hard enough in the gym, you’re not going to lose body fat or pack on muscle,” he says. “Your diet will not do all of the work for you.”

For a post-workout snack, Soueid has a 90-calorie protein shake and a protein bar. “It really helps reduce my appetite,” he says. “Typically I tend to over-eat if I don’t have this, because I get super hungry after I work out.”

The third meal is pasta and meatballs made with lean ground beef, totalling 600 calories. Then it’s time for the fourth and final meal of the day, and it’s a bro staple: chicken breast and rice with salad and salsa. This brings his total daily consumption to 2,200 calories, across 234 grams of carbs, 53 grams of fat and 201 grams of protein.

Philip Ellis is a freelance writer and journalist from the United Kingdom covering pop culture, relationships and LGBTQ+ issues. His work has appeared in GQ, Teen Vogue, Man Repeller and MTV.

Save Up to 70% (and Over) on Lovehoney's Sex Toys, Lingerie and More